Qanon claimed HRC, Hillary Clinton, was in custody and going to be charged late 2017. That is very clearly not true. 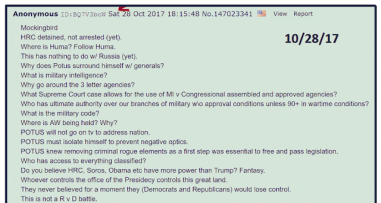 “Follow Huma” where? Yesterday she was “Mockingbird” on Broadway, but I don’t want to “follow” as plays aren’t my thing. (Huma at Mockingbird) “HRC detained” and “not arrested (yet)”? Well over a year later and they still sneak her out for public appearances and she is getting press for writing letters to 8 year olds. In fact, Qanon has ranted about Huma repeatedly (11-3-2017, 4-21-2018), and although it is public knowledge that she has broken the law nothing is happening. By the way, it wouldn’t exactly be proof if something did happen because there was public speculation before Q said anything already. Yet nothing has happened. 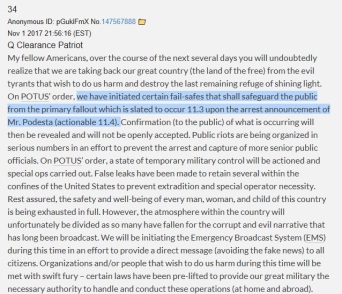 Qanon clearly says Podesta will be arrested 11-4-2017. That did not happen. HRC and Podesta are plenty of clear cut examples of Q being wrong.