Late last year and early 2018 there were rumors that Julian Assange was working with Q and that Assange was released and safe. Julian Assange responded to this disinformation himself before he became isolated in the Ecuadorian embassy:

Then on May 28th 2018, 17 days after Alex Jones and Jerome Corsi came out against Qanon, Wikileaks speaks (twice) directly on Q for what looks to be the first time. Here is what they said:

And then just recently Wikileaks said this about Qanon: 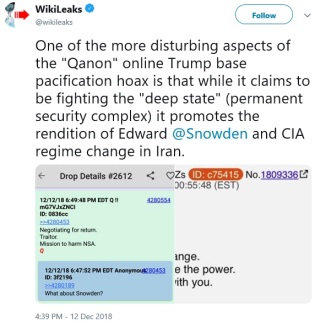 Whatever your opinion of the morality of Wikileaks releases, they have been proven to be accurate and reliable as far as I know. Are they right about Qanon?